Use a stone to smooth nose of sear notch, if burred. Exercise care to maintain a retentive angle and stone to a polish. If too much metal is removed from top face of sear, the face becomes too low to retain the slide.


This will cause inter- ference of rear end of sear with the slide, holding sear out of engagement. Test sear retentive action after stoning, and if found questionable, replace sear Stone slide same as sear. Sear Release Stop Lever. Inspect sear release stop lever for wear and burs on forward lower surface where it contacts the connector and on the rear surface where sear release strikes. Sear nose may become expanded due to action of sear re- lease.

Sear Carrier Assembly. Inspect camming surfaces on sear carrier assem- bly 13 for wear and burs. Inspect for 26 loose, cracked and worn connector stop riveted on right end. Tighten connector stop in sear carrier. Replace, if worn or damaged. Trigger Connector. Inspect top bear- ing surface of trigger connector where it contacts sear and sear release stop lever. This is a crtical surface and should not be worn or burred as it would affect function of the sear and stop lever.

Make certain connector pin is riveted se- curely in place. Rear projections on the heel of trigger must be free of wear that would affect the operation of the change lever. Top rear corner should be sharp, not beveled, at the point where it enters the notch in the change lever. Inspect heel and tip for sufficient clearance with base of guard for full retraction. Remove rough edges on trigger. Replace trigger 16 if rear projections are worn as to affect the operations of the trigger.

When trigger is released both the sear and sear release stop lever should return to their normal positions. When change lever is set at F position and trigger partially retracted, the connector raises the forward end of the sear and sear re- lease stop lever together. As the trigger is further retracted, the connector, still rising is cammed from under front of sear by cam- ming surface on sear carrier and continues to raise the forward end of sear release stop lever, and holds it in raised position as long as the trigger is fully retracted.

Check trigger pull of the rifle as in- dicated in figure The force exerted to release slide is not less than 6 pounds, nor more than 10 pounds. Note: The word "creep" is defined as any per- ceptible movement in the trigger pull between the time the slack is taken up and the slide is released, with pressure applied at a uniform rate of increase over a period of not less than 10 seconds.

In testing trigger pull of rifles, the inspector will use weights totaling 6 pounds and weights totaling 10 pounds. Make certain the change lever is set at the A or F position and the rifle is cocked. Rest the weight on the floor and hook the trigger weight rod onto the trigger so that the pressure is applied about one- quarter of an inch from the lower end of the trigger fig. Check to insure the rod contacts the trigger only and does not rub against the side of trigger guard body.

Carefully raise the weight from the floor. If the 6-pound weight pulls or the pound weight fails to pull the trigger to release the slide, correct as indicated in paragraph Correcting Trigger Pull a. 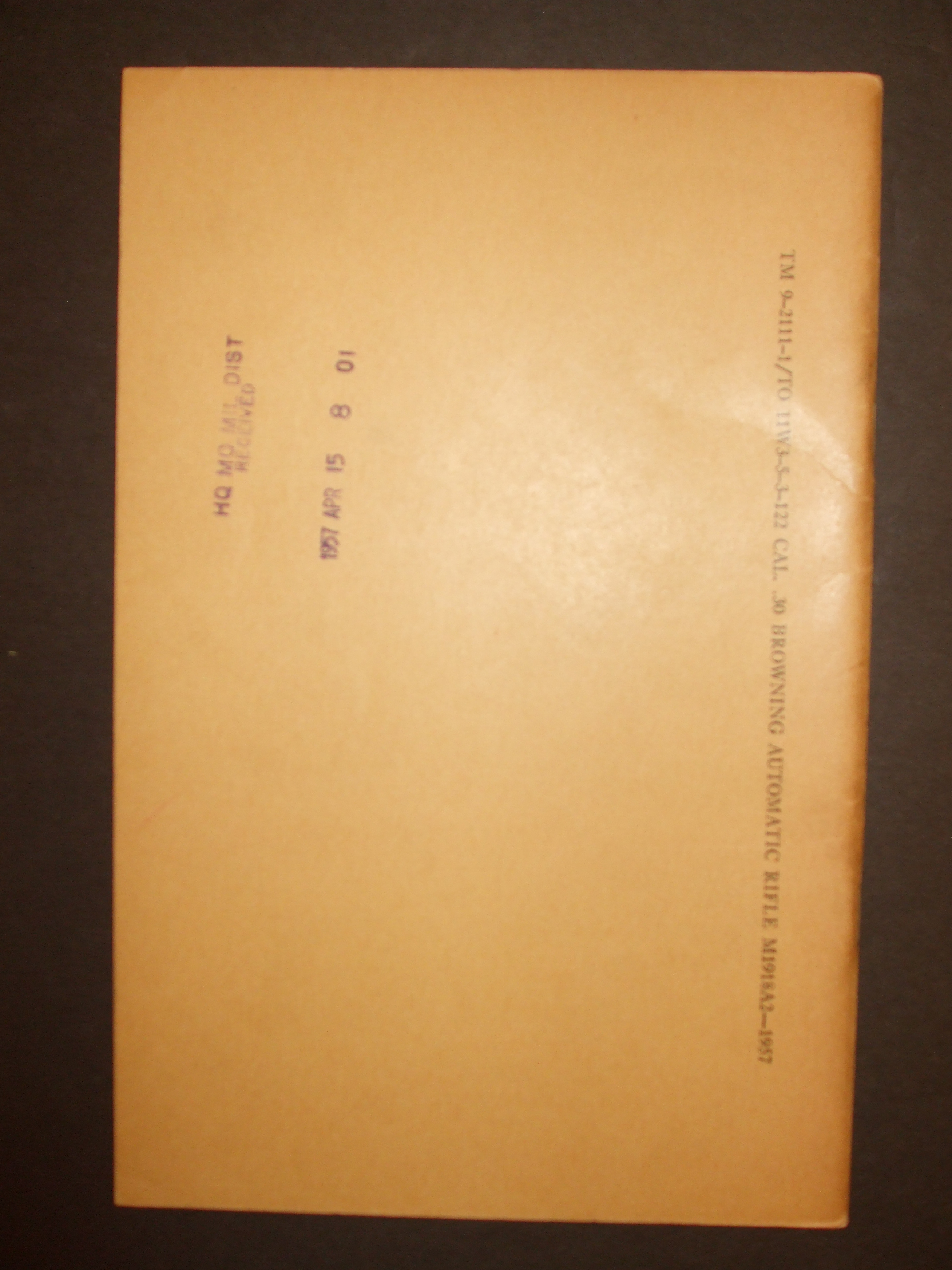 This can be corrected by replacement of sear spring. Excessive trigger pull. Excessive trigger pull is caused by binding of com- ponents, foreign matter in trigger guard body or burs on trigger, connector, sear pin, or sear. Correct these conditions by removing foreign matter and stoning the burred surfaces. ICC LB. Checking trigger pull. Section IV. Removal Remove the slide and piston group as shown in figure Disassembly Disassemble the slide and piston group in numerical sequence as shown in figure Inspect free action of gas piston and slide in conjunction to gas cyl- inder tube and receiver.

Piston and slide 29 should move freely in gas cylinder tube and receiver when rifle is tilted upward and downward. Inspect piston retaining spring pin for wear or damage. Replace spring pin, if damaged.

Inspect slide for deformation of side rails by pinching or springing, which could cause binding with operating mechanism or receiver, badly dented rear end indicating forzen buffer , and worn hammer pin hole. Side rails that are bent or deformed can be spread or sprung back into shape by using wooden wedges and clamping in vise with copper jaws. Check slide after repair for free movement within tube and receiver. Replace slide assembly , if worn or damaged beyond repair, c. Gas Piston Assemblies. Note: Gas piston assemblies of early manufacture fig.